Pain management for my back 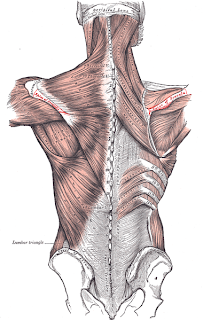 My back pain saga takes yet another turn. As I mentioned last time, I had another MRI done, per doctor's orders, after a two week round of Cymbalta and Lyrica didn't work to alleviate the pain.  (Not only did it not alleviate the pain, I had to deal with very unpleasant side effects.)  So my doc says there wasn't anything on my MRI that showed up other than "normal wear and tear" and for a 34-year-old, that statement doesn't even make sense.  But since I'm still in pain, they sent me back to the neurosurgeon's office (as I'd predicted). The doc who did my discectomy a little over a year ago took a job elsewhere so I had to see the other neurosurgeon, who also said he saw nothing of significance on my MRI.  Now this is where it gets tricky; I read the report from the doctor who read my MRI and he mentioned a few bulges, stenosis, and degenerative disc but these other doctors didn't think it was significant enough to warrant my pain which is especially confusing to me.


Let me interject here. I kind of feel like I did those years when I begged three doctors, a nurse practitioner, and a chiropractor to take me seriously about my earlier pain. And what happened? No one wanted to believe it was anything more than muscle strain and it turned out to be a rather large rupture. But I digress.


I'm forced to try alternatives now.  The neurosurgeon said I needed epideral cordisone shots. So I said okay. He's the doctor, after all, and if that's what he thought I needed, I should try it. But then I started to worry. I'm only 34. Presumably (and hopefully), I have some years ahead of me. Do I really need a needle poked into my spine multiple times? Won't that damage the injection site and degrade my back further?


I wasn't completely sold on the idea in the first place but I was willing to try it. I'm so freakin tired of being in pain. But I couldn't drive to Birmingham for multiple treatments. I needed to find something closer to home. After being told that a local doctor everyone had been  recommending was no longer in Fort Payne, I decided on a pain management clinic in Huntsville. But the doc doesn't want to do cortisone injections and seems to think we can work around it. Instead, he did a round of  Intra Muscular Stimulation, also known as IMS and also known as dry needling, which, after hurting for a few seconds, relaxed my muscles at the time. The rest of the day I was sore and felt like I'd had an energy shot.  It helped me just a little the next day but hasn't seemed to help me since. He also prescribed a muscle relaxer, which is fine as long as I'm going to sleep but doesn't help me at all during the day.  And then there's the non-narcotic pain meds.  This pain medication, while it helped ease my pain, ultimately made me so sick I couldn't function. I think it is pretty sad that I have to choose between being halfway functional while my back hurts or being so sick at my stomach, I can't do anything. :( I'm supposed to take some hormone therapy and some supplements to help my thyroid function. I will at least try to find those and take them but I admit, I'm not very optimistic. I can't help but wonder how the doctor can presume to know what supplements I need when he hasn't seen a lick of bloodwork from me.

I'm calling today to get my physical therapy appointments set up. This should be interesting, seeing as how I was supposed to get pain relief before starting physical therapy but now will have to start it regardless.


I go back to the pain clinic on the 12th. To be honest, I've been in pain for so long, more than five years now, that I'm not hopeful that there's much else for me out there. I should be positive, I know, but constant pain has a way of stripping one's confidence. However, it's either this or nothing. I kind of feel like this is my last chance for relief. If this fails, then I have nothing and I will be in this shape for as long as I live. So we'll see. I'm going to give it my best and follow instructions and see where we go from there.


Peace, love, and trying for optimism,

Email ThisBlogThis!Share to TwitterShare to FacebookShare to Pinterest
Labels: back pain