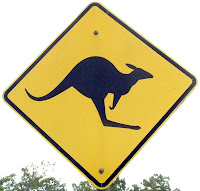 POV (point of view) issues can KILL even the best story. I remember one novel I edited last year carried one of the most engaging stories I'd ever come across. But the author didn't understand basic POV rules when writing in 3rd person and it pretty much guaranteed the book got a toe-tag.

She didn't confine each scene to one person's POV. Instead, she was hopping around like a separate “see all” entity. She was in the cop's head one paragraph, telling what he was thinking and feeling, then the next paragraph in a witness's head, then the next another cop's head and so on until she'd covered everyone's POV in the scene. It's what I like to call the “Kangaroo Effect”, when you hop around from one point of view to the next without breaking the scene. It can be very confusing and chaotic for a reader.

One trick that I've learned to help me tackle 3rd person POV problems is to think of it like writing 1st person.

Writing in first person POV is simple, right? You only have one person's thoughts and feelings to explore. Try that technique while writing 3rd person. Confine yourself to showing only one character's thoughts, feelings, reactions, etc. while writing your scene. If you absolutely have to show another character's POV in the same scene, close off the current section of the scene and start with a new section.

Hopefully that will help you understand 3rd POV issues a little better. If there are any questions or comments, feel free to leave them in the comment section below. I don't know everything but I try to help where I can. :)

Have a great day!

Pamela
Posted by Pam at 8:59 AM No comments:

Email ThisBlogThis!Share to TwitterShare to FacebookShare to Pinterest
Labels: writing

Each one of my post back surgery updates have held a common theme; pain. A year after the surgery to remove the portion of the L5-S1 ruptured disc that was pressing on my root nerve, I am still in pain. It is not the same striking pain that left me unable to function so that is the bright side. But it is still pain and there isn't a day that goes by that I'm not in pain. Some days are better than others. Some days I can get along with a facade of normalcy. Other days, I'm in so much pain that it ends up leaving me bedridden, my back swollen so bad, it feels like I'm resting on tennis balls when I lay down. In fact, as I write this, I am sitting up in bed with ice packs on my back. Sometimes pain rolls through my left leg (like right now) but I can usually adjust my position so it is tolerable. Oh, and the feeling did eventually return to my foot. The tips of three toes are still numb but it beats having no feeling in the majority of my foot like I did just after my surgery.

The kicker is that I believe I have more herniated discs but since an MRI eats up much of my allotted insurance, I can't risk not having enough insurance money in case one of my children needs it more. (Thanks, Anthem.) One of my doctors seems to think I have premature degenerative disc disorder, which is a premature aging of the discs in the spine. Though the doctor didn't know this, this is a condition that has already struck a few members of the paternal side of my family.

When this back stuff first started, I began to gain weight. Exercise became useless because the more I did it, the more I was in pain. When I understood what premature degenerative disc was, I realized that my Olympic dreams would never come true. Yes, I'm joking. I had to change my mindset about exercise, because I'd always hit it with fierce force. Now that I can't, I've had to focus on low impact exercising like walking, some biking, walking, swimming when I can, and walking. I realized I had to do more to promote weight loss. Weight loss, after all, would take unnecessary strain off my back, so I've been told. I have been doing portion control and really watching what I put into my body for the last three months. I'm down several pounds and two sizes. Has the pain let up any? Nope. I still have a few more pounds to lose so we'll see how much of a difference it has on my level of pain. I'll let y'all know.

My only option right now is to live with it the best I can. I don't have the insurance necessary to partake in pain management so I'm pretty much stuck with it for now.

If there are any changes, I will update. Until then, I hope you have better luck with your back pain than I've had with mine.

Email ThisBlogThis!Share to TwitterShare to FacebookShare to Pinterest
Labels: back pain


Here are the contents of the latest newsletter to hit subscribers of my mailing list. Subscribers to the official newsletter are automatically included in drawings for giveaways. To sign up and get news directly to your inbox, click here and fill in the form.

Announcing the winner of the newsletter sign-up giveaway! Dwight Coker from Fort Payne, Alabama was the lucky recipient of the signed, print copy of The Influence, the debut novel by Pamela Caves. 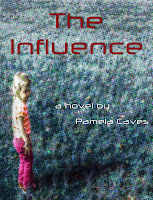 The Influence now on your favorite site!

The Influence is now available in print! You can order your copy from Amazon, CreateSpace, or order your signed copy on Pamela's website. Pamela's debut novel is also available in ebook format on your favorite site.  For Kindle owners, it is on Amazon, for Nook owners, it is on Barnes and Noble. Also on Smashwords in a variety of ebook formats. Search for The Influence on your favorite book purchasing sites!

Barrier is coming back!

Fiction Lake Publishing is gearing up for the release of the second story in Pamela's sci-fi adventure series, Barrier. The Purpose of Pain follows sixteen year-old Lenya McKay.  She is told that both her parents were killed when their vehicle imploded. She refuses to accept it, though, and goes off in search for them with the help of new Squad 13 weapon's officer, Corporal Zhoven Spiridon. Instead, they find something they could never have suspected; enemy infiltration. Growing up takes a sudden leap when she is Zhoven's only hope for survival against an unpredictable and brutal enemy.

You can contribute to the Barrier universe.

Sky Legend, SD 32's Chief Control Officer, is pregnant. But wait! Not only is she expecting, she has two buns in the oven! And Barrier fans get to decide the gender and names of these new additions.  There is currently a vote in progress on the official Barrier blog. Click here to see the announcement and vote in the poll on the sidebar to choose the gender of Sky's babies. Then email pamelacaves@rocketmail.com with as many name choices as you wish. The names Pamela chooses from the submitted pool will be written into a future Barrier story and the person/people who suggested the names will be announced on blogs and social media.

Be on the lookout for Barrier: The Purpose of Pain to be released later this year!
Posted by Pam at 11:26 AM No comments: