Your second kid won't be like your first... but you will love them anyway. 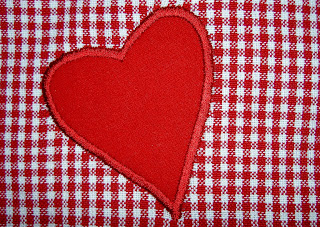 This is for the parents of one child who are expecting another child. Listen up. Your second kid will not be like your first kid. Okay, so maybe they will look alike and there is a slim chance that their personalities will be similar but that's rare so you might as well prepare yourself now.

This post is inspired by a conversation I had with a friend the other day. He shared the happy news that his wife is expecting their second child. "I hope this one is a boy just like my first little boy. That would be perfect."

Having two children myself, I had to break the news to him that it wasn't likely to happen that way.

As those of you with more than one child can attest, boy, was I ever wrong. Where my first son is a little high strung and a bit of a worry wart, my second son (at times) seems to go with the flow a little easier. It's easy to get my oldest son to comply to unfavorable requests after a bit of coaxing while most of the time, getting my younger one to comply to similar requests is like trying to tell a tree to cut itself down. While I had to rock my older son to sleep as a baby, my younger son actually seemed to fall asleep easier when I simply laid him down.

So you see? You can't often approach your children in the same way. Different personalities invite different reactions and parents of multiple children can witness to the fact that what one works for one child, may not work for the other.

The same goes for that well of love inside of you. I've loved my first son with the ferocity of a lioness since the moment I laid eyes on him, perhaps even before. I admit, though, that as I carried my second son, it was difficult for me to imagine that I would have that same level of pure, raw love for him. I was so worried that my well of love wasn't that big. As it turns out, those were unfounded fears; fears of a mother worried about her ability to care for and nurture multiple children, fears I'm sure many mothers have. As I came to find out, my well was big enough. I am as fiercely in love with my younger son as my oldest and I cannot imagine what my life would be like without them. Hell, I barely remember the days before I had children!

So there is no need to fret. I know it's hard to imagine a different bundle from that of your first, but be content that no matter what, your well of love will still be big enough to hold them, even if they aren't what you expect. :)

Pamela
Posted by Pam at 1:39 PM No comments:

Email ThisBlogThis!Share to TwitterShare to FacebookShare to Pinterest
Labels: parenting

Your child and internet pictures. 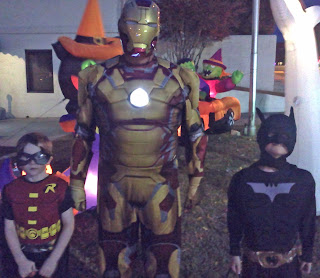 Yesterday was a fun day! Despite the threat of impending storms, we geared up and set off on our
trick-or-treat run. The kids got to meet Iron Man at the Fort Payne Police Department (above - which was the highlight of their trip) and Fyffe once again put on a good event at the park. Though some people didn't make the connection between my costume and my little Batman and Robin, I was still pretty happy with it.
﻿﻿﻿﻿﻿﻿﻿
The evening led to an interesting discussion on my Facebook page about letting strangers take pictures of kids to post on social media. There was a lady where we were dining asking to take a pic of my kids to post on Facebook. I refused and though I could be wrong, she seemed a little offended about it.

Now, I might consider allowing this if it is for a business or organization and I knew exactly what they would do with the picture but it isn't my policy to just allow anyone, even family, to take pics of my children to post online. I can never be certain who really understands and utilizes privacy settings in the right way. Occasionally, I will post publicly set pictures of my children but that practice for me is limited. I decide who, when, where, and how my kids are portrayed. I chose to include the picture above because it illustrates our fun night. The internet, just like the real world, can be dangerous. There is another reason, too. When my kids are grown, what effect will ceaselessly posting public pictures of them do? I can't answer that and neither can any parent given that we don't have insight into their future lives and careers. I admit I cringe a bit when I see my friends post public pictures of babies and children over and over. I'm not judging; do what you feel is okay, but I always wonder if the user behind the posting understands privacy settings; if they really mean to post so many pictures for the entire world.

Back to the lady in the restaurant: I suspect she was an employee but she didn't identify herself, and given the circumstances, it was doubtful that she managed the restaurant's Facebook page. That is the first rule of social media management, which I have experience in. You don't take and post pictures without stating who you are, who you represent, and what you plan on doing with the picture. It's okay to ask, and encouraged. It would be rude to just starting snapping pics. And a little weird.

And if you're just a person asking to take pics of random children, that comes off creepy.

It is our job to ensure that our actions don't place our children in danger. So here's a screenshot to illustrate how to change those settings on your photos. 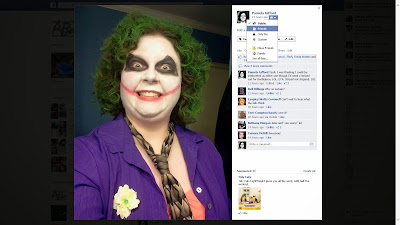 You can enlarge the photo by clicking on it. Notice in the top right there is a little world icon next to my name. Click the one on your photo and you can change that from public to friends only, or whatever you want.

Note: I didn't blur names or anything from the screenshot because this post on my Facebook is public which also means that anyone who comments on it also shares that comment publicly. Anytime you comment on a public post, ANY public post, personal wall, fan page, whatever it is (settings for that post will be denoted by the icon that displays next to the user's name), you are commenting for the whole world to see.

I hope I've been of some assistance. Let me know what you think in the comments.

Email ThisBlogThis!Share to TwitterShare to FacebookShare to Pinterest
Labels: local, miscellaneous, parenting, the paranoid's guide to using the internet