"Barrier: The Purpose of Pain" by Pamela Caves - Excerpt 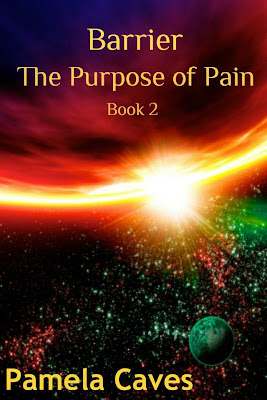 Available on:Amazon
Smashwords
Barnes and Noble
Search for it on your favorite site!

Lenya McKay
"You look really young to be out traveling the cosmos," Zhoven said.

I was going to be trapped in a cramped vehicle with this handsome man for a few days so small talk was pretty much inevitable.  I was tempted briefly to lie about my age and flirt with disaster, but like the good little girl my parents raised me to be, I spilled out the story about how my parents had gone missing and were now thought dead.

"You don't think they are?" he asked me.

"No. I mean, I know there's a possibility but they were fierce fighters. They may have been science nerds but they would've clung hard to life because of me."

I'd seen the expression on his face before.  It was skepticism.  But despite that, he looked over the map and said, "So I suppose it hasn't escaped your attention that we will be passing near their wreckage site.  When were you planning on asking?"

I was a little embarrassed but there was no use feigning ignorance.  "I was just going to casually bring it up in small talk."

"Hmmm," he hummed but I noticed a flick of a smile.

"What I don't understand is why they veered from their course. They should've sped passed the Afgar system."

"If their flight plan was anything like ours, then they should've passed through the orbits of the seventh and eighth planets; grav drive all the way."

"Something must've gotten their attention."

"You have a theory?"

Indeed I did.  It was like I'd had nothing else to think about the last few weeks.  To have someone finally listening to me was like taking a deep breath in nature for the first time.  "There wasn't enough wreckage left for them to tell me if the pods had been launched from their vehicle. There is one habitable planet in the system, Afgar II.  They said the pod signals weren't on the planet but..."

"But you don't think they looked hard enough?"

"What if they were damaged?"

"One pod's tracking signal being damaged I could believe.  But two?"

"I know, but you have to consider the atmosphere on that planet. It's very humid, hot, and the air pressure is twice what we, and our technology, are used to."

He squinted at the projection of the map and chewed his bottom lip.  "Yeah... maybe."

"You're skeptical, I get it. I'm not asking for much, but can we just make a quick sweep through? You know, just to see if there's anything unusual."

His expression softened.  "Of course. What are strangers for?"

"Thank you," I said. I hadn't realized until that moment how itchy I'd  been. I relaxed as relief swept over me.  If anything, I was going to see the area for myself and for some reason, that was the most important thing in the universe to me.

***
For the next sixteen hours or so, we talked about our lives, gossiped about celebrities, played games, and napped.  Zhoven was a very pleasant traveling companion and by the time we'd reached the Afgar system, I'd developed more than a passing lust; it was a full-on crush.

He nudged me with his elbow and I woke to see a large shining dot in the window; the Afgar's red giant.

Basic scanning technology came standard on most vehicles and while it wasn't exactly UA issue, it was all I had.  I knew that the scanners aboard a United Alliance cruiser would pick up more than a personal vehicle but desperation could also be a powerful tool.

Zhoven, however, wasn't using his scanners.  He was simply staring out the window.  "The reports say that their vehicle was found near Afgar II, right?"

I'd forgotten that Roens had the ability to see beyond a Human's capability.  Roens not only could see temperature differentials but also some wave lengths most species couldn't.

"What about the scanners?" I asked.  The readouts were blank and I wondered if he'd even powered them up.

"I checked before I woke you. Nothing."

"But my parents are Human.  They wouldn't have been drawn in by something they couldn't see and the cruisers would've picked up something if it were there."  Now look who was being the cynical one.

"Maybe they were drawn in by something they could see."  He pointed out the window at... well, nothing.  "That's an energy wave-length.  It's weaker and of a different build than anything else around it. Maybe there was a ship out here. Shall we follow the signal?"

He steered the vehicle on manual, following something invisible.  We followed that "nothing" for the next couple of hours at a steady pace.

"What would cause a vehicle to just drop out of grav?" I asked.

"It could've detected something in the flight path, another grav drive maybe.  Or maybe it was a malfunction."

He shook his head. "Something was out here and I bet they followed it in, just like this."

I could've continued to ask questions but I knew Zhoven wouldn't have the answers.  I watched him stare out the window and steer.  Suddenly, the vehicle lurched, knocking me back into my seat.

"You can see a gravity well?"

"No, but I know them when I run through them.  This is really odd."

I kept trying to see what he was seeing, even though I knew better.  It was like trying to order the lights on in a room when you know the power is down.  "What?"

"The signal... there's no break.  There should be a break from the gravity well."

The ship stumbled again.  And then again.

"Where are we? Are we near Afgar II?"

When the ship shuddered again, Zhoven flipped on the sensor equipment.

"Could the gravity wells be responsible for the vehicle wreckage?"

"No.  It's just a space bump.  It's not going to hurt anyone unless they are zipping along at high speeds. But there really shouldn't be so many of them."

I could see the sensor display from my seat.  "They aren't registering on your sensors."

He sighed and the ship dipped again.  "This entire area is flooded with something artificial."

"Because there's no way that I wouldn't detect at least some of these wells unless this area was flooded with something to mask it."

"Wouldn't the cruisers have suspected something if they couldn't detect the gravity wells?" The UA cruisers had said they'd performed a thorough investigation of the area. My heart fluttered. What if they hadn't?

"Cruisers are too big to physically feel the wells. They wouldn't have known they were there anyway."

We both knew the implications of what we'd found.  It might've meant that the cruiser's sensors had simply been blocked and that there really was a chance that my mom and dad were on the planet. Renewed hope flooded over me, filling me with new energy.

"You're forgetting the most obvious question, Lenya."

"Someone had to have flooded the area on purpose to keep something hidden.  I'm guessing they've used a form of barium energy. Barium energy, in its pure state, will create gravity wells and block key sensor nodes."  As if on cue, the ship quivered again.

I knew what he was suggesting, but my mind refused to process it, like maybe if I didn't think about it, it wouldn't be true.

Unfortunately, he said it aloud, and suddenly, I had more to worry about than whether or not my parents were lost on some random planet.

"I think there may be a Snarl base somewhere out here."

"The galaxy is a war zone, Lenya. Infiltration is a common strategy.  We need to get out of here now and send a fleet. But we can't engage the grav drive until we've cleared these wells."

The second planet loomed in the distance, looking a little like a marble among the stars. My breath came in rapid pants and my heart started hammering my chest.  Zhoven's fingers flew over the comm console as he simultaneously steered the ship in the opposite direction. The marble fell behind us. The ship bucked again.

"What are you doing?" I asked, the tension evident in my tone.

"I'm sending a message to the base." He locked eyes with me in what initially looked like an attempt to comfort me.  He failed miserably.  "It's a long flight out of this system. We might not get out of here before..."

He didn’t finish his sentence.

All I saw was a flash of light and then total darkness.

***
I'd been dreaming of my parents, remembering some of the routine things I'd often overlooked. Most mornings, Dad would fetch his compad and a cup of black coffee, then go sit on one of the living room chairs where he felt the need to stretch his legs out and put his feet up on the coffee table.  Almost every morning, Mom would come out of the bedroom fiddling with her hair or smoothing her uniform.  "Get those stinky feet off my table!" she'd chide, and he'd remove them long enough for her to go into the kitchen. Once she was out of the room, back on the table his feet went, and he'd continue reading the morning news as if he'd never been interrupted. It had almost seemed like a game to them.

I remembered in my dream that I'd simply sat on the couch, staring at my father as if I didn't know him, or was confused about why he was there. I didn't speak to him; I just stared, feeling as though maybe I was underwater in which one nostril was below the surface and one nostril was above. I could breathe, but it never seemed like there was enough air. And then I realized that it was sorrow I felt and when I remembered why, I opened my mouth to finally speak to him.

But then I woke.  When that first bout of consciousness rolled through my foggy head, I shut my eyes tight and tried to will the dream back.  But as hard as I tried, I couldn't fall into that pit of sleep again.

A tear escaped as I realized just how much I missed them.  I needed to--no, I had to--find them. Then I remembered...

My entire body jerked fully awake.  All around me was darkness. I rose quickly but ended up crashing my head against something hard and stars burst in front of my eyes as pain slashed through the top of my head.  I tried to keep my grunting and whining to a minimum. I didn't want to attract any attention just yet.

After the worst of the pain subsided, I started feeling around me.  The dark space, which was only large enough to hold my body, was hard and seemed to have the inconsistent rolls and curves of rock. It was slightly damp, too, and I heard running water from somewhere. I thought I might be in a cave.
They'd gotten us.  The Snarls had gotten us.


Available on:Amazon
Smashwords
Barnes and Noble
Search for it on your favorite site!