No new projects until after January 1.

Hi, y'all. I just wanted to pop in a moment and let everyone know that I will NOT be accepting any new projects until after the first of the year. I have a lot (and I mean A LOT!) going on at the moment so I can't possibly take anything new. My apologies but I'd like to keep my sanity. The clients I already have scheduled are fine.

Update: I'm booked through February 4. Please make sure you check my website for current scheduling. Please note that if you have a project for me, I cannot guarantee you the next available spot unless you confirm it with me.
Posted by Pam at 7:20 PM No comments:

Voting reflections and... wait, where have I been? 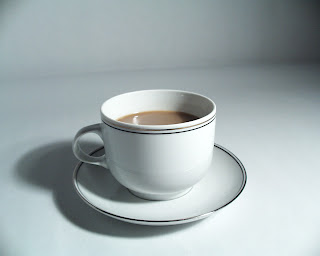 Coffee Time - (n.) That short stretch of time in the morning where you know you should be starting work but you can't until you've consumed at least half a cup of coffee.

As an aside, I enjoy the simpleness of the picture to the right, though I should note that my regular coffee cup is three times larger than that one.

I just spent my coffee time sifting through additional candidate and amendment chatter to make my final decisions this election day. To say I'm disenchanted with politics in general is an understatement. I think that our money-hungry government rather prefers to bog the people down in paperwork and extraneous language rather than DO something that makes a difference.

Nevertheless, I'm doing my part. I do think we're lucky to live in a nation that allows us to vote, no matter how corrupt the system has become. While I don't believe my national vote means much because of the nonsensical way they count votes, local elections deserve attention, too. Though I feel strongly about some of the candidates, having run for a local office, I have a little more tact than I used to because I've gotten a taste of what people expect of you and how people react to you when you run for public office. It's more challenging than any average person might expect. Heck, it's more challenging than I even expected. But I'm glad for the experience and the insight it provided. One might even say that it's had a positive effect on me; I no longer jump to criticize and I take more time looking at the overall picture than I once did.

In any case, I hope you go out and vote today, just because you can.

In the meantime, I realize that I'm not posting like I usually do and there are two reasons for that.  First, I'm going through a rough patch personally.  While it hasn't affected my desire to write, it has diminished my want to share.  Second, this semester of school has been especially difficult and time consuming. I'm coming up on finals in a month and this blog is a little low on the priority list so there hasn't been, and likely won't be, much of me to go around for a while.

But I'm still here and I'm still kicking. Writing-wise, I have the second Barrier story coming out very soon. No word on how my latest novel is faring just yet so we'll see.

Have a good week!

Pamela
Posted by Pam at 8:57 AM No comments: