Write for free. It's not like we need food or shelter to survive, right?

I read a post yesterday that, when it was posted on Writer Beware's Facebook, immediately drew outcry:

Godin to authors: You have no right to make money anymore

Let me interject... one rule of thumb when writing content is to make the title something that people will want to click, even if it is a little misleading. Which this is. Sorta.


"In a recent interview with Digital Book World, the writer and creator of the Domino Project — a joint publishing venture with Amazon that he recently wound up — was asked about his advice that authors should give their books away for free and that they should worry more about spreading their message and building a fan base instead of focusing on how to monetize it right away."

The key words: RIGHT AWAY.  He's not saying that you should never be paid but that you should pay your dues first, so to speak. But that message was lost in a sea of objection - as if we didn't already know that starving artists also have bills to pay and every art (yes, even writing) costs money to produce. Why shouldn't we be paid, too? 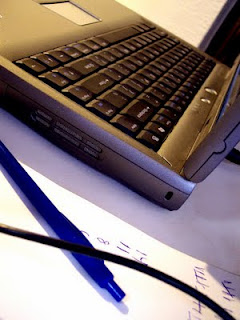 But writing is no different than any other business out there. Yes, it is an art but if you want to make money from your art, any kind of art, you have to start from the bottom and build your way up.  It's like blogging. I don't consider myself an expert blogger, but I do know enough to give advice here and there. And I get at least three emails a month, "How do I make money from my blog?" I tell them you can't... at least not right away. You have to find a niche and build it from nothing. You cannot expect to make a ton of money right out of the gate with any venture.  Even a brick and mortar business holds to the same principle.  Establish yourself, build your following, be persistent and diligent, and then you'll start to see money trickle in.

Several critical writers also pointed out that it's easy to say such when you make a comfortable living from your art like Godin supposedly does.  Let me point out that I DON'T. I'm still at poverty level when it comes to making money from my writing. But that's okay because I'm still working at it.  It's okay because I don't expect to become rich and famous from my work. It's okay because I simply love the art itself.  My motivation isn't the money... if it was, I would've given up a long time ago.  When you're a writer, it has to be about something deeper.  It has to be about an urging inside of you that drives you to continue writing despite the obstacles.

So how can I make money from my self-published writing?

-As I mentioned above, be persistent. Only through persistence can you reach your goals. It may take you a year, two, three, or many more. But don't give up. You'll never be satisfied if you give up.

-Don't be afraid to give stuff away for free if it means you can build a bigger following. Of course, this is an author's preference and is, by no means, something all writers should do. I choose to give away short stories and promo copies of my work and have seen an increase in followers (and reviews!) when I do that. It works for me.

-Be able to take criticism. I read a post from a lady on a content site the other day who wanted to know why the editor was rejecting her piece for "grammer errors".  And as you guessed, the piece was littered with them. She asked for help, a couple of people tried to help, and the next instant, she deleted the entire thing and wanted to close her account, still insisting that she was right and knew everything about writing. I felt sorry for her at first because I know she had to be embarrassed by the whole thing... but then still insisting she was right?  She lost my sympathy when she turned her nose up at the people who were trying to help her.  If you are one of those people who can't accept constructive criticism, then writing IS NOT your thing.  If you can't handle the criticism, you WILL NOT be able to handle the reviews.  Sadly, there are a lot of "high and mighty" writers out there just like that and it's the very reason why self-pubbed authors continue to defend themselves because they are being thrust into the same category as those who really have no clue.

-Pay your dues.  By dues, I only mean that you should put in the time it takes to hone your craft.  In my personal opinion, you should NOT self publish if you haven't either already been traditionally published or you haven't put in at least 2 to 3 years of consistent traditional submitting.

We don't need no stinkin' money.

Do I think all art should be free as suggested toward the end of the aforementioned article? Absolutely not. I think the real problem with this mindset is that too many consumers have entitlement issues.  A lot of them don't understand the creative process so it's easy to envision artists as pulling something from nothing and doing no real work.  Therefore, they don't feel as though they are hurting anyone emotionally or financially when they illegally download something they don't have a right to. This is as true with books as it is music, movies, and other creative media.

All in all, if you're really writing just for the money, you're going to be frustrated.  Frustration is not conducive to a writing career. So yeah, we do have to make a living and we have a right to make a living and charge for our work, but we have to first establish ourselves as credible.

Email ThisBlogThis!Share to TwitterShare to FacebookShare to Pinterest
Labels: writing