"The Jump" by Pamela Caves - Excerpt 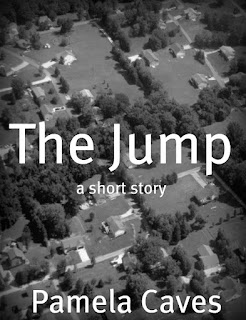 The Jump is available on Smashwords (several formats available), Amazon, Barnes and Noble, or search for it on your favorite site! It is now free on most sites.

After the initial falling sensation passed, Nila grinned and spread her arms to fly. The Earth didn’t appear to be getting any bigger yet. It was just there, beneath her, her hovering in a peaceful stillness. If not for the wind whipping around her, Nila would’ve felt completely motionless.
I miss you, Norman, she thought, a wash of sadness crossing her mind. Up here, she almost felt like she could reach out and touch him. Her heart ached as it had every time she’d jumped since his death.
She heard a shrill whistle from just above her. Theo was motioning for her to pull the cord. When she looked back down, the Earth had gotten bigger; she had just been too lost in her own thoughts and so absorbed into the serenity of diving that she hadn’t really paid attention. Nila gave Theo a thumbs up and pulled.
She felt a pop and instantly realized something was terribly wrong when she wasn’t pulled from the velocity. Her chute hadn’t opened.
Her heart was already speeding from the jump itself. Now she felt a pull on her chest that suggested her heart couldn’t take much more stress without failing. She willed herself to calm down, looked up to see where Theo was and let a breath out when she saw that he was still hovering near her. He was not about to pull his cord without first making sure she would be safe.
The backup would have to suffice. Nila reached back, pulled the banana and it ripped half off into her hand. She tried again but couldn’t get her hand around it. She knew Theo would come but would he be able to help her in time?


The Jump is available on Smashwords (several formats available), Amazon, Barnes and Noble, or search for it on your favorite site! It is now free on most sites.

Email ThisBlogThis!Share to TwitterShare to FacebookShare to Pinterest
Labels: the jump