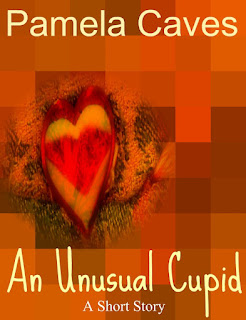 An Unusual Cupid is available on Smashwords (several formats available), Amazon, Barnes and Noble, or search for it on your favorite site! It is now free on most sites.

The annoying man on the bus who called Marcus "Yo, Dude," just wouldn't leave him alone.
--------------------------------------------------------
Marcus was about the fifth or sixth row back. He sighed, annoyed that the Yo, Dude man had bothered him just for a peek at some woman. He caught a glimpse of the back of a curly, long haired brunette head. Nothing unusual. Nothing spectacular. "And?" Marcus said, a hint of sarcasm cutting into his tone.
"And she's quite the eye candy." Despite the irritation that Marcus felt he was clearly portraying, Yo, Dude man was still grinning as if he'd just discovered the secret of farts. "Why don't you go say hi? I think she's reading the same book."
"Why don't you go say hi?" Marcus opened the book back up and tried to find where he’d left off.
Apparently Yo, Dude man couldn't take a hint. Marcus felt another flick across his arm. "Because, I'm chained down." The guy held up his hand to show off a gold band. He was still grinning like a doofus. The guy leaned over again. "Listen, I have a kind of sense for these things. If you don't like her, I'll pay you $100. Are you game?"
Marcus narrowed his eyes at him, trying to determine if he meant it. A stranger was offering him $100 just to go talk to some random woman. He could definitely use $100. Who couldn't? Although Marcus doubted he’d ever see the money, it would be worth the effort just to get the guy off his back.
"Fine. And if I don't, will you leave me the hell alone?"
"Sure." The silly grin grew wider.

Would it be worth it?


An Unusual Cupid is available on Smashwords (several formats available), Amazon, Barnes and Noble, or search for it on your favorite site! It is now free on most sites.

Email ThisBlogThis!Share to TwitterShare to FacebookShare to Pinterest
Labels: an unusual cupid