"Future Past" by Pamela Caves Excerpt 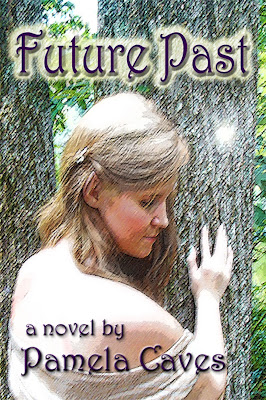 When Nafre and Dayel boarded the ship that would sail them all the way to a port near Borsta, Dayel had to stop and catch her breath. There was something off about the ship, though she wasn't sure what it was. There was the feeling that something - or someone - was there that shouldn't be.


"Something wrong, girlie?" Nafre asked and Dayel decided to shake it off since she couldn't explain it even to herself.


Her agitation grew as they made their way to a cabin within the bowels of the ship.  It was small and windowless which reminded Dayel of her accommodations in Niraz.  And for the first time ever, Dayel began to experience a bit of sea sickness as the ship set sail.


"It helps if you go up on deck for some fresh air," Nafre commented but Dayel refused, still with the overwhelming notion that she was better off out of public sight.


The beds were lined up one after the other against the wall and, of course, wasn't very accommodating for Togwas. Dayel had to choose between spreading the blankets out on the floor or risk being pummeled by Nafre's humongous (and quite smelly) feet. It didn't take her very long to reach a decision.


Over the next several days, Dayel's daily activities consisted of reading, eating, and sleeping. After her initial agitation, Dayel decided she was just fine, and probably safer, being a recluse.  Nafre, who usually stayed out most of the day, brought food, candlesticks, and even bathwater. Nafre never spoke about where he went or what he did all day aboard the ship and Dayel didn't ask. In fact most days, Dayel didn't even know it was night until Nafre stumbled through the door and collapsed across the beds.


On the third night, one of the beds broke but Nafre continued to sleep on it anyway.


On the sixth day, he came through the door carrying a bag of coins, a silver and jeweled serpent bracelet, a wheel of cheese, and a bottle of vintage drink, all of which he’d won in a card game.  They stuffed themselves, drank until they were silly, and laughed until they cried about things that didn’t make sense the next morning.


On the twelfth day, Dayel read until she was bored, ate leftover bread slices, and finally fell to sleep wondering when Nafre would be back. When she woke, presumably hours later, he still wasn't there. That uneasy feeling came back and intensified.


Against her better judgment, Dayel made the decision to venture outside their cabin in search of him. Almost two weeks cramped inside four bare walls might've driven a normal person slightly mad but to Dayel, it was familiar and familiar held a semblance of safety. Stepping only two paces outside the door made her feel a bit apprehensive, as if she'd suddenly been exposed.


Deep breaths.  Two more steps.  Slowly now.  Her senses were only a little panicked but it was enough to distract the rational part of her brain that reached out naturally to her surroundings. Even if she'd wanted to prevent what was coming, she could've only done so by calming down.


One step at a time led Dayel down the long hallway to a set of stairs. Having only been down them once, she wasn't sure if this was the correct stairwell to take her above deck.  She had to start somewhere though.


As she climbed, she mindlessly scratched at her back, an action which was becoming all too familiar.  Something back there suddenly pierced her fingers and she hissed in pain. She stopped her ascent and blinked several times at the red liquid oozing through the skin.


Gingerly, she reached back again and lightly ran her fingers over her scars.  Between the lines of rough, mangled skin, sharp points had broken through.  She couldn’t believe that she’d scratched them hard enough to cause scabs.  But a scab wouldn't be hard enough to cut skin, would it?  She decided she couldn't possibly know the answer to that, as she never remembered having scabs before.  The first thing she needed to do once they docked was see a physician or apothecary.


Within the distraction of her scars, her senses had forgotten her earlier panic. A dark mass invaded her mind.  Without realizing the physical proximity of it, she turned in haste to run back to the cabin. The sconces along the wall didn't properly illuminate the doorway to the hall. Dayel could only make out a shadow before something seemed to pinch her chest.


But it wasn't a pinch at all. The back half of an arrow protruded from above her right breast. The pain wasn't immediate. In fact, it didn't much register at all. Dayel tried to take a breath but gurgled blood instead. Blackness swirled and the stairway bent over itself. Something slammed against her face, over and over.  Stairs, she thought, as she tumbled down them.


A simple arrow wouldn't have had that effect on her. Poison. The arrow had most certainly been laced with poison.


They said she couldn't be killed. Dayel thought that was funny, considering she was dying.
Click here to read another excerpt.
Purchase on Amazon - Print version or Kindle
Print version available on CreateSpace﻿
Posted by Pam at 9:24 AM

Email ThisBlogThis!Share to TwitterShare to FacebookShare to Pinterest
Labels: Future Past