"Theory of a Tramp" by Pamela Caves - Excerpt 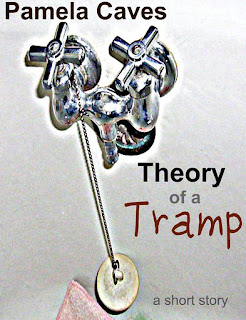 Theory of a Tramp is available on Smashwords (several formats available), Amazon, Barnes and Noble, or search for it on your favorite site! It is now free on most sites.

Olivia has just found a racy text message on her husband's phone...
From Theory of a Tramp ~

She found it difficult to catch her breath in the midst of the hatred she felt. How dare he! She had done nothing but devote her life to him and how did he repay her? How dare he! How the hell could he be so selfish? How could he stoop so low? How could he do this to her? How dare he!
Once the trembling subsided enough for her to catch her breath, she delicately placed the phone back on the counter. She recalled a moment in time several years ago when a mutual friend of theirs had confessed to cheating on his lovely wife. Olivia remembered the discussion with Bill that had followed. She thought about how she might feel if he ever cheated on her, (which, by the way, was nothing compared to the reality of it) and she had told him that if she ever discovered he’d cheated on her, she’d kill him.
He chuckled at the time and said she’d never have to worry about such a thing. She remembered feeling lucky then. She was so lucky he was hers and only hers. He’d been her everything.
Sweat soaked her shirt. She slid to the floor, exhausted, livid, sad… her chest ached. Her heart was completely and utterly broken.
He wouldn’t get away with this. She wouldn’t lose everything she had because he couldn’t keep it in his pants.
With only a couple of hours until he came home, she contemplated her next move. He would come in and want a beer. He would trudge upstairs and soak in a warm bath. She knew what she had to do.
Once he was dead, she’d be okay. She would miss him but she knew it was the right thing to do.
***
Discover a twist you won't expect!
Theory of a Tramp is available on Smashwords (several formats available), Amazon, Barnes and Noble, or search for it on your favorite site! It is now free on most sites.
Posted by Pam at 8:49 AM

Email ThisBlogThis!Share to TwitterShare to FacebookShare to Pinterest
Labels: theory of a tramp